Severn Street Masonic Hall is a Grade 2 listed building, and is a very important part of the architectural heritage of the city of Birmingham. Severn Street was originally situated in an area called ‘The Froggery’, a poorly drained, marshy area that had been part of Birmingham from Medieval times.

In the 18th and 19th century it was a poor, slum area populated by thieves, crooks and prostitutes living in tenement blocks.

The infamous ‘Peaky Blinders’ who were based nearby in Small Heath, were active in the city centre in the late 19th century and were responsible for the murder of a Birmingham policeman in front of what is now “The Mailbox”.

In 1809 the small Hebrew community in the city built a synagogue here at Severn Street, which was the second permanent synagogue built in the city.

It was preceded by a synagogue in Hurst Street which was opened in 1791. Prior to that, services had been held in peoples’ homes and rented halls.
Originally it consisted of the entrance rooms and this room only. In 1813 the synagogue was badly damaged in anti-Semitic riots. 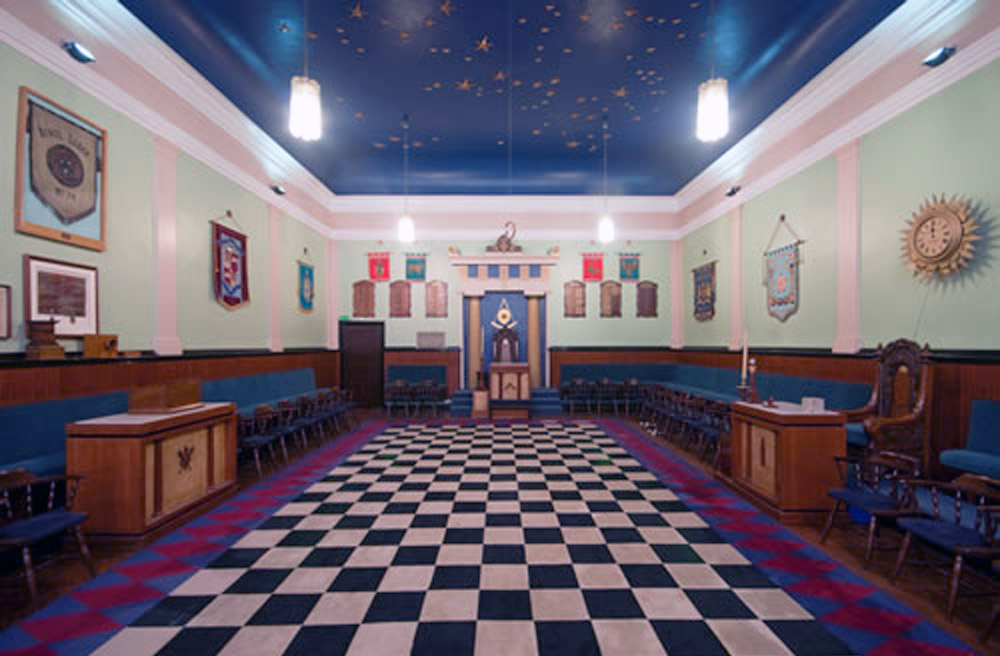 It was rebuilt in 1827 by Richard Tutin and continued to be used as a Synagogue until 1857, when the present Singers Hill Synagogue was built around the corner. The Severn Street synagogue building was then sold to the members of “Athol Lodge” and opened as a Masonic Hall in 1858. It is the first and oldest Masonic Meeting Place in Birmingham in the Masonic Province of Warwickshire.

After the founding of the Jewish “Lodge of Israel” in 1874 the two Lodges shared the building. In 1891 the frontage to Severn Street was redesigned, remodelled, and added to by Essex and Nicol Architects from Birmingham and remains little altered today.

The Severn Street Masonic Hall, has, since 1936, been managed by a Board of Directors of the Company Athol Masonic Buildings Ltd, appointed by Athol Masonic Lodge No. 74, the ‘de facto’ owners of the buildings. 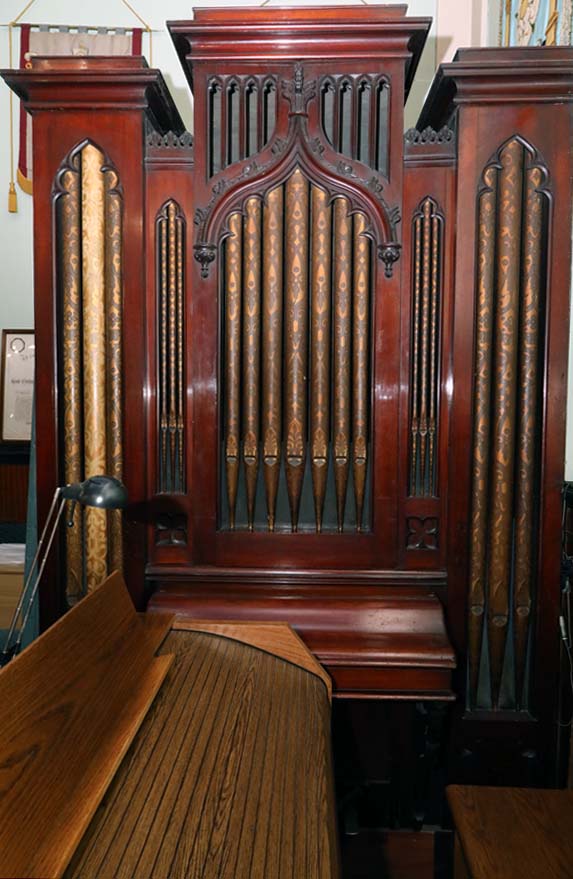 Musical instruments were banned from all Jewish religious services by the Rabbis after the destruction of the second Temple in 70AD.

All music in synagogue religious services is unaccompanied except for the Marriage Service. If the organ was used, it would have been used for this service. It is believed that Felix Mendelssohn played this organ.
He visited England 10 times with at least 2 visits to Birmingham. He stayed with Joseph Moore, a rich benefactor at the Crescent, Birmingham – now the site of Centenary Square.

In 1808 Moore had founded the Birmingham Oratorio Choral Society who performed musical festivals every 3 years. In order to provide the town with a building sufficiently large to do justice to the festivals, Moore successfully campaigned for the building of the Town Hall (1832-4).

However, Mendelssohn found the organ in the town hall difficult to play and it is believed he used this organ to rehearse for the concerts. As a member of the Jewish faith and, it is believed, a Freemason, Mendelssohn visited the synagogue on a number of occasions.

The platform, originally for the Ark of the Covenant now houses the carved oak Worshipful Master’s chair where the head of the Lodge sits during Masonic ceremonies.

This is also the “King’s Chair” which Edward VII when was seated when he was still Prince of Wales. He later ascended to the throne in 1901 after the death of his mother Queen Victoria.

The Chair bears two inscription plates; the second says: “This Chair was lent to the Birmingham and Midland Counties Agricultural Exhibition Society for the use of His Royal Highness the Prince of Wales KG, Most Worshipful Grand Master, on the occasion of his visit to the Exhibition held at Bingley Hall on November 28, 1885.

The Worshipful Master’s Chair is one of a suite of three carved oak chairs with the Junior and Senior Wardens Chairs.

The fluted Greek Doric columns with pilaster responds to either side of the Worshipful Masters chair were added by the Masons. 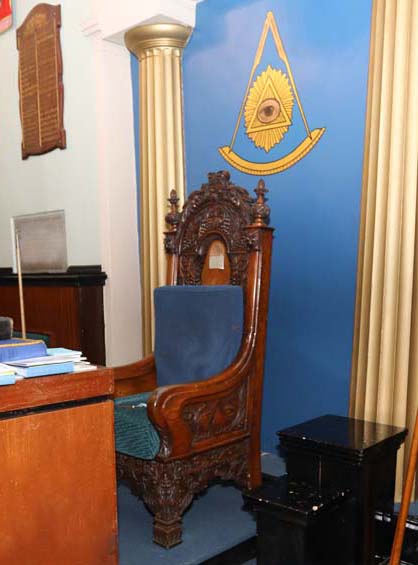 The Dining Room and ante-rooms were added by Henry Nadan between 1871 and 1874 and built by a local Birmingham builder called Moffat.

The Masons were careful to preserve the historical tradition of the building by adding ‘Maginei David’, Hebrew for Stars of David, affixed to the top of each of the pillars. There are five-sided Masonic stars on the two ornate fireplaces (five sided to refer to the five points of fellowship over which there are magnificent gilt over mantle mirrors. These allow the whole interior to refer to the two original functions – Synagogue and Masonic Hall. After every meeting Masons use this Dining Room to hold a meal or ‘festive board’. Freemasonry is not a secret society but it is a society with secrets.

The current version of freemasonry was formed in 1717 in London based on ancient stonemasons’ guilds. The long tradition of Freemasonry reflects the skills and tools of the stonemasons who built Solomon’s Temple. 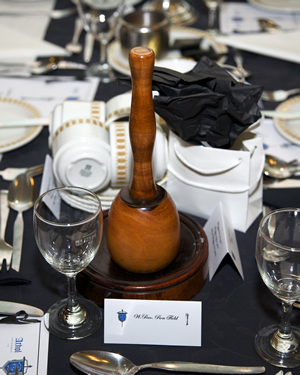 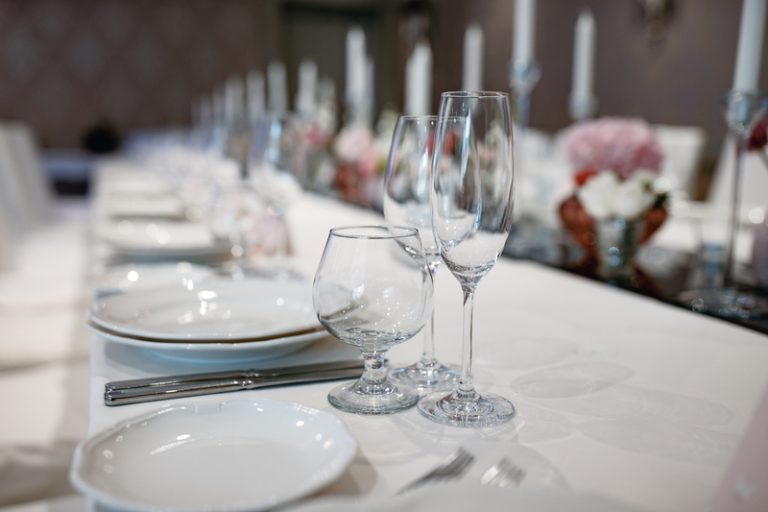 The Lodge Room has fluted Greek Doric columns with pilaster responds to either side of the Worshipful Masters chair which previously housed the Hebrew Ark religious scrolls while in the Dining Room “Stars of David” adorn the ceiling cornices and together with five-sided Masonic stars on the two ornate fireplaces and magnificent gilt over mantle mirrors which allows the whole interior to resonate of the two original functions. 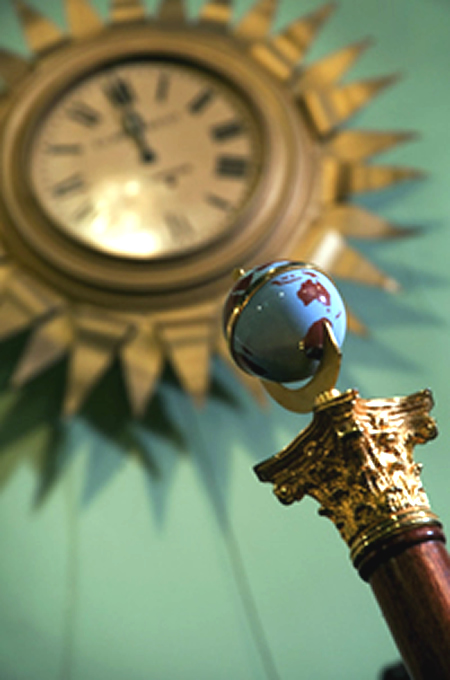 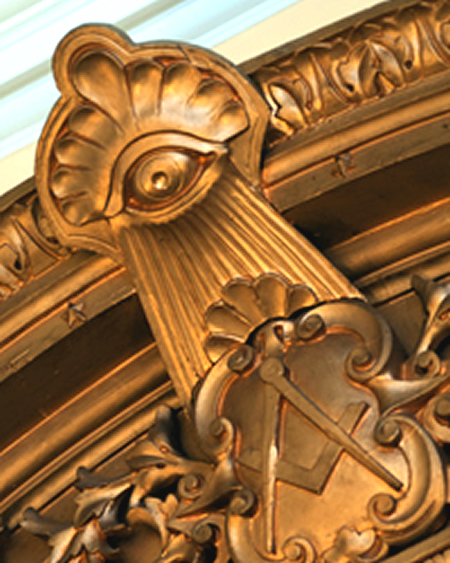 Severn Street Masonic Hall is of extreme importance to the architectural heritage of the city of Birmingham and has achieved a Grade 2 listing.

Athol Lodge have their very own “King’s Chair” which was sat upon by a King of England, Edward V11 when he was Prince of Wales before his accession to the throne in 1901 after the death of his mother Queen Victoria.

The carved oak Worshipful Master’s Chair which proudly sits in the Lodge Room at Severn Street Masonic Hall bears two inscription plates which read “Presented to Athol Lodge No 88 by Bro John Vaughan PM AD 1863” and beneath it on a silver plate “This Chair was lent to the Birmingham and Midland Counties Agricultural Exhibition Society for the use of His Royal Highness the Prince of Wales KG, Most Worshipful Grand Master, on the occasion of his visit to the Exhibition held at Bingley Hall on November 28, 1885”

The Worshipful Master’s Chair is one of a suite of three carved oak chairs with the Junior and Senior Wardens Chairs both bearing inscribed plates which read “Presented to ATHOL LODGE No 74 by Bro Archer, Rawlings and Stableford in 1875”

Manager of the Birmingham Musical Festivals.

Joseph Moore (1766-1851), was a Birmingham benefactor, born in 1766 at Shelsley-Beauchamp or Shelsley-Walsh, Worcestershire, was educated at Worcester. In 1781 he was sent to Birmingham to learn die-sinking, and afterwards entered into a partnership in the button trade.

In 1808 Moore founded the Birmingham Oratorio Choral Society, with the view of bringing together for practice the local singers engaged at the triennial festivals. In order to provide the town with a building sufficiently large to do justice to the festivals, Moore successfully agitated for the erection of the Town Hall (1832-4). A public subscription was raised to pay for the organ. At the festival of 1834 both hall and organ were used for the first time.

To enhance the fame of the festivals Moore went to Berlin, and induced Felix Mendelssohn to compose, first, ‘St. Paul,’ which was given at the festival of 1837, and then ‘Elijah’ performed on the 26th August 1846. Moore died at his house, Crescent, Birmingham, on 19 April 1851, and was buried in the Church of England cemetery there. A monument was erected to his memory by subscription.

Felix Mendelsohn visited England on ten separate occasions and Birmingham at least twice and was always the guest at the house of Joseph Moore, in the Crescent, now the site of Centenary Square.

Mendelssohn was a member of the Jewish faith and believed to be a Free Mason and his friendship with Moore developed because of their mutual interests.

Moore was introduced to James Watt by Matthew Boulton, both members of the illustrious “Lunar Society” and both known Masons.

Moore as well as being a part of Birmingham’s booming industrial economy he was a prominent member of City’s social life and musical fraternity and, by association, was probably a Free Mason although this is not been verified.

The Severn Street Synagogue initially built in 1809 was destroyed and rebuilt in 1827 housed a wind organ that would have been available for Mendelssohn’s use as being a distinguished Jewish visitor to the City.

Felix Mendelssohn would have regularly attended the Synagogue and it is not unconceivable that he rehearsed both his major works, St Paul and the Elijah, on the organ in the Synagogue because of its juxta-position with Moore’s house, in the Crescent, and the Town Hall all being within walking distance of each other.

Mendelssohn had expressed his difficulty in playing the new organ in the newly built Town Hall and how hard it was to play so taking the opportunity to rehearse on an established pipe organ would have been surely welcomed.

The Hebrew Community sold the Severn Street Synagogue to the members of Athol Lodge in 1857 that turned it into a Masonic Hall in 1858 and part of the fixtures and fittings of the sale was the aforementioned wind organ. 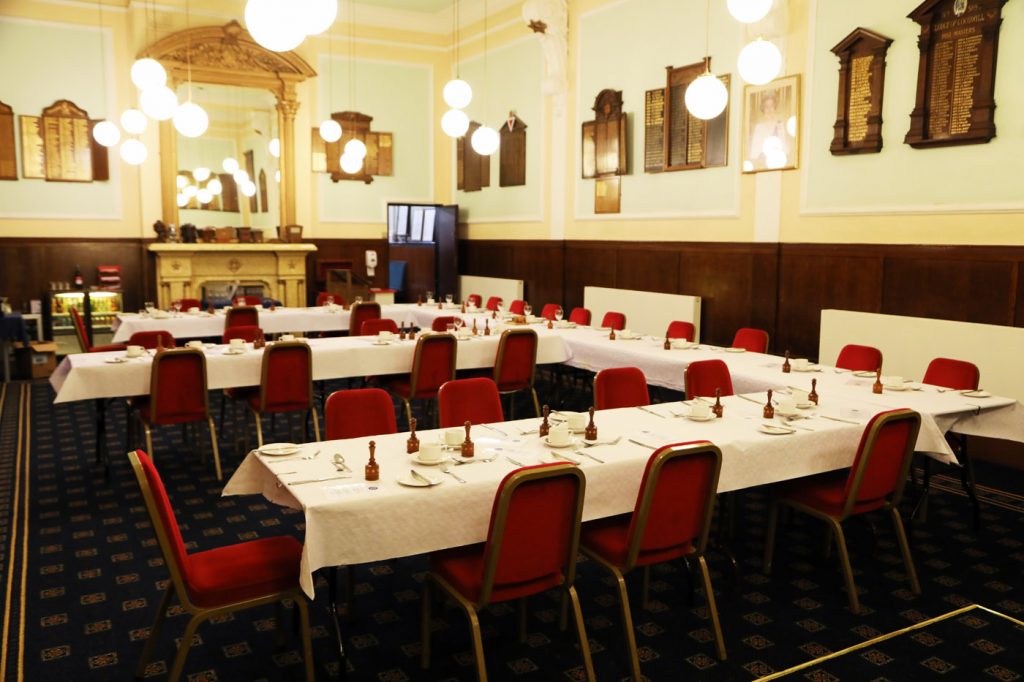 The organ was refurbished at the turn of the 19th century with a new keyboard onto which the organ builders, John Banfield of Birmingham, placed their plaque with the date displayed as MDCCCLL (1900) which was custom and practice in those days and does not refer to the date of its original construction.

It remains insitu in the Lodge Room today but is very rarely played on because of its condition but still remains the organ that Mendelssohn probably played on. 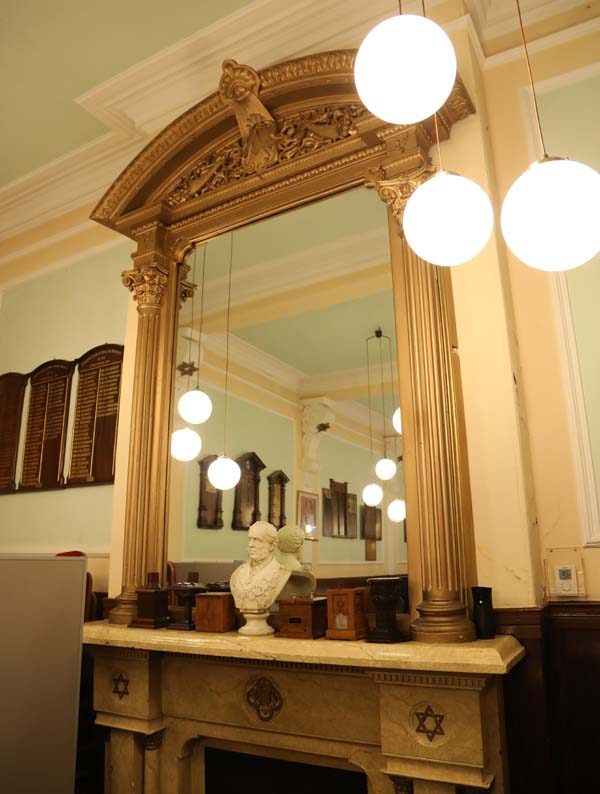 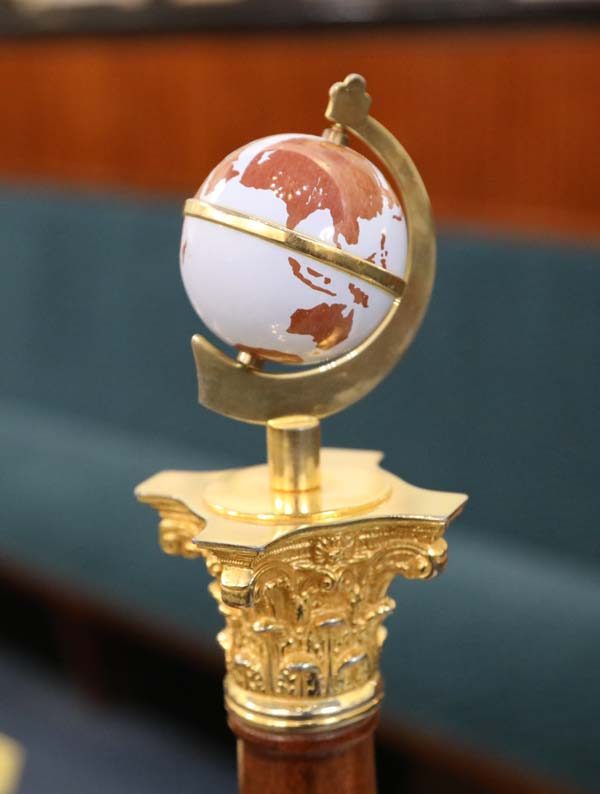 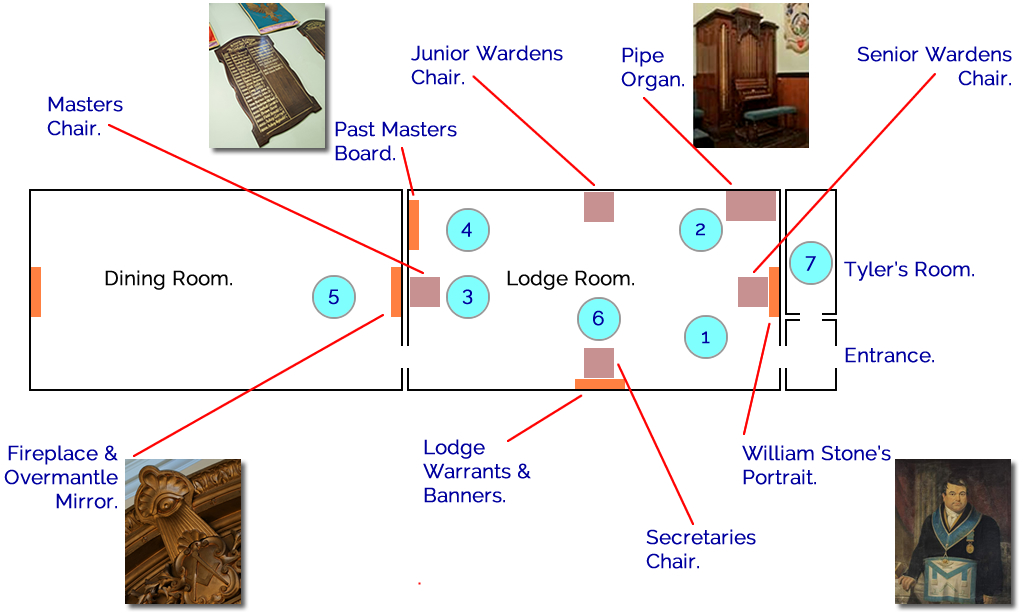 Learn about the 6th Duke of Atholl.

The 6th Duke of Atholl – Chieftain, Grand Master, and a Memorial to Remember.
In 1865, why did over 500 Scottish Freemasons climb a hill in Perthshire carrying working tools, corn, oil and wine?        READ MORE….